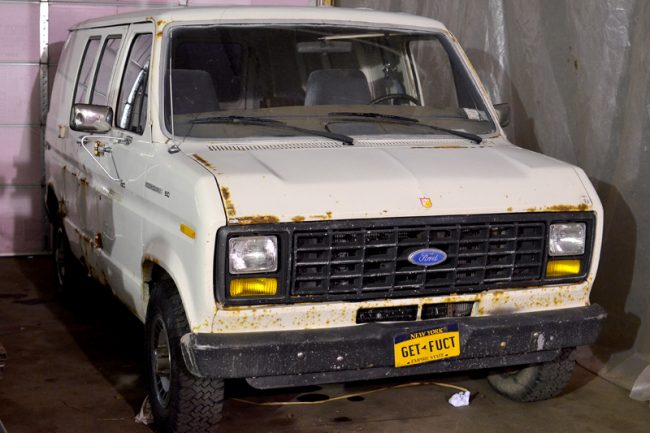 Orginally sceen on the Least Most!

This story was written by Wilbur Barrick in 2002, after a road trip from Johnson City, NY to Austin, TX for a FBM and T1 contest at Ramp Ranch...

Why Lou Bickle unexpectedly backed out of his spot in the FBM van, the Skeleton, I’ll never know. Crandall offered Lou’s seat to me. I accepted, expecting the worst.

The bright winter morning was cool and crisp around 10:00 am in Binghamton, NY. Kelly Baker arrived in high spirits. He stepped out of his pickup truck with a big smile on his face. He already had an open Old Milwaukee in one hand and the twelve pack in the other.

The mob of FBM team riders and friends puttered around the two vans, packing in the bikes and gear. The Skeleton was being crammed to it’s limit; everything was in but one last item. Brock Yoder appeared on the scene, hefting an enormous cooler, roughly forcing it in between the front pilot seats. He had a lit cigarette projecting from his lips. Squinting, he took a contemplative drag and exhaled. Likely in response to a homophobic impulse, Baker taped up several “Club” centerfolds to the metal walls and ceiling of the van.

Dave and Cesar revved up their engines. Dave piloted the Skeleton out onto Interstate 81, and headed south; the Pink Panther followed behind us in convoy formation. Knowing that we had to run a gauntlet of police speed traps before the Pennsylvania line did not put a damper on the illegal activities inside the Skeleton.

Although FBM’s white cargo van was anonymous looking on the outside, the excitement levels inside were escalating. A skirmish between Kelly and Cornpie had evolved into a friendly brawl on the floorboards of the van. Kelly emerged the winner and took a victory pull from the can of beer still in hand. Brock opened the big cooler and liberated a case of Milwaukee’s Best Ice, distributing the cans to both the passengers and driver. “Kick Ass,” Kelly commented with satisfaction. I popped one and took a swig; it tasted ice cold and shitty.

Brock played Social Distortion’s self titled CD, further amping up the crew through their conditioned response to the first song on that album. I could tell Scotty was getting buzzed-up (I recall that he was using a plastic Antihero can wrap). Kelly raised his can to the window as a friendly gesture to the last state trooper, displaying his beverage as we blew past.

Dave polished off a beer and accelerated the van the as we crossed the PA border. Minutes later, we were cruising over the big bend of the Susquehanna River. The Panther broke formation and attempted a pass, met by Dave’s maneuvering, which prevented their passage. “Fuck dude!” Kelly was tipped off balance while attempting to relieve himself into an empty beer can. He was grinning wide as his stream wildly missed the can. Piss sprayed on both his leg and the Skeleton’s cargo door. “Don’t tell Crandall” he said with a grin. Kelly wondered out loud about how his wife was going to react to the circular cut the can’s sharp mouth edge had made on the tip of his pecker.

Brock crawled up into the loft or “Death Box”, located in the stern of the Skeleton. He opened up one of the back windows and released a piss bottle onto the interstate- green Yuengling glass exploded on the highway in front of the Pink Panther. Caesar executed a high speed turn, narrowly missing the larger shards of glass. I had visions of some poor old lady coming along and getting stranded with flat tires. When I questioned Brock’s actions, he growled something and tipped back another beer. I did not press the subject any further. Brock inserted a Garth Brooks CD into the player and selected a country version of Snoop Dogg’s song “Gin and Juice”, destined to become an anthem for the entire trip.

Caesar caught Dave off guard, and sped past us in the Pink Panther. In passing, Fisher parted the window curtains and made ridiculous gestures from inside the Panther. Dohner’s head popped up in another window, his face pressed flat against the glass. Someone, possibly the Shitty Kid, leaned out the shotgun window of the Panther and blatantly bombed the Skeleton with a full beverage container. The resounding thump against the Skeleton’s hull served to excite our crew.

Dave throttled the Skeleton and we caught up to the Panther. Baker was passing Cornpie a soda cup filled with Brock’s piss when Dave started pumping the brakes, just as the handoff was taking place. Cornpie protested as the jolting spilled piss on himself and Kelly. Baker was apparently un-phased. “Aim for their driver’s window!” Cornpie put a cap and straw on the cup and moved into the shotgun seat.

Through the Panther’s curtained side windows, we could see Dohnor carrying on, along with Fisher, Pat Schraeder, DTS, and the Shitty Kid. “Better not screw this one up” Kelly cautioned. Cornpie hesitated, he considered the windspeed and cocked back his arm. He threw and released the cup- but it cased on the Skeleton’s window frame, showering Brock’s piss back into the tightly packed Skeleton.

I took a glance at Scotty Putrueilio; his face was red and beading sweat from laughing so hard. At that point we had traveled approximately 25 miles; Austin was still more than 1,500 miles distant.